On June 16th, 2019 my day began with a student meeting. During the meeting we discussed proper shift behavior, such as reporting for duty on time, and scheduled a talk with Dr. Mike Vardaro; one of the Co-Chief Scientists on board.

During the time between the student meeting and my shift, I seized the opportunity to spend some time outside on deck. On ship, it’s easy to get lost in completing daily tasks and honing the scientific research being performed. I sometimes forget to take a moment and really take in my surroundings. I found myself wanting to take respite, step outside, breath in the ocean air and really appreciate the beautiful vastness of my environment.

There is nothing quite like being aboard a ship in the middle of the Pacific Ocean with no land as far as the eye can see. It truly is unequaled to any sight on Earth. After I took sufficient time to take everything in, I returned to my duties. I prepared for my shift by going over the Daily Operations Plan and then headed off to dinner.

Once I finished eating, I headed to the Jason van and began logging. I had the opportunity to report on dive J2-1156 during which we were able to recover COVIS, a multibeam sonar plume imaging system. When the dive was successfully completed, I headed to the chemistry lab where I assisted in relabeling chlorophyll sampling bottles to be used for the next CTD 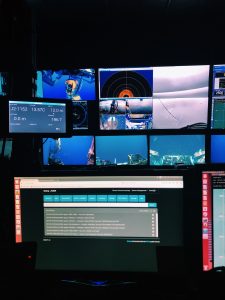 View from inside the Jason Control Van as the vehicle surfaces with a winched Shallow Profiler platform latched underneath the vehicle. Credit: C. Meier, Queens College, V19.

On June 15th, 2019 the Atlantis reached Axial Base. This marked the beginning of a 10-hour Jason dive that everyone on board was thrilled to watch. Many of the students not on duty, me included, stood in the Jason control van to observe and be a part of the excitement. At 11:30 we took a break and grabbed lunch.

After lunch, we were lucky enough to get a tour of the engine room from the Chief Engineer on the Atlantis. He told us all about the inner workings of the vessel. This included mechanics such as; the multiple engines, fresh water production, power on the boat, steering for the boat, and the gigantic winches that were used to get ROVS and other instruments in and out of the water.

Later in the day my shift began, and I was able to assist on two Jason dives. During these dives the Jason team deployed two instrument platforms on the vertical mooring at Axial Base. The two platforms deployed were a PIA and a SPA.

Once this was complete, we began a two-hour transit to the ASHES hydrothermal field. During the two hours we were allowed to take a break from our duties and look at the magnificent sunset and the full moon that hung in the sky. The moon against the still ocean water was unlike anything I had ever seen. Its great luminescence lite up the black sky and radiated across the horizon as far as the eye could see. A sight incomparable to anything one can see on land.

On June 14th, 2019 the Atlantis crew finished their work at Slope Base and began transit to the next destination, Axial Base. A sixteen-hour long transit that left some of the Atlantis’ passengers sick with nausea. Thankfully the wonders of modern medicine, aka Dramamine, enabled me to continue functioning without puking my guts out.

At noon, we had a student meeting where each of us discussed our ideas for either a science-based research project or an outreach project. While many decided to focus on doing an outreach project to attract more students to the VISIONS program, I decided to utilize the extensive library of data OOI has collected to do a project more focused on scientific research and discovery.

Once the meeting commenced my fellow students and I dispersed to complete our respective duties. Having some downtime, I decided to reread the Cruise Plan to learn more about the dives Jason would be making at Axial Base.

Since we were still in transit after dinner, Dr. Kelley excused us from our shifts and all of the students gathered in the theater to watch a movie. We watched Pirates of the Caribbean as the shipped rocked back and forth making for an intense 4D experience.

On June 13th, 2019 the Atlantis set sail for its first destination, the Endurance Offshore Site. It was an experience I shall not soon forget. Amongst the crew was a ubiquitous feeling of excitement and nerves, along with a wave of sea sickness. With many of my fellow students down for the count, I was able to assist on multiple operations all day long and into the night.

I first assisted with the 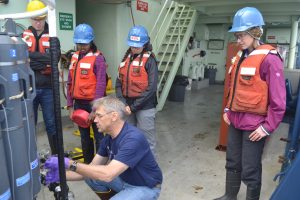 It took a steady hand and patience to collect a viable sampling from the CTD. Once the CTD operations ceased and dinner had been served, I got my first chance to log in the Jason control van. This marked the beginning of my five-and-a-half-hour shift. This interval of time might sound long but being in the control van is like being in a control room at NASA for a rocket launch. Its science and technology like you have never seen before. Real-time feed from the ocean floor, insanely high definition cameras, and robotic arms that respond instantaneously. During my shift two dives occurred, and the hours flew by. During the first dive of my shift Jason deployed a PIA and recovered a SPA. This was followed by a dive that deployed a replacement SPA and made connections from the platform to a cable cage at 200 m depth. Throughout this whole process it was my job to log every pivotal moment of the dive, making sure not to miss any critical tasks made by Jason or the crew. It’s an intense job for not only the students but for everyone involved with the dive. Engaging with Jason may be a demanding task, but it is one that I cannot wait to do again.

Before boarding the Atlantis, I wasn’t sure what to expect. The singular thing that was certain was that I was both nervous and intimidated. Being aboard a research vessel with so many renowned scientists and engineers was daunting. I had preconceived notions that the crew members would be aloof and sparing with their knowledge. I could not have been more wrong. Over the past few days my fellow students and I have been welcomed with open arms. Every member of the science team and the SSSG team has been extremely approachable and willing to answer questions. The Chief Scientist herself, Dr. Deborah Kelley, has an open-door policy and is willing to answer any and all questions we may have. Our first task on board was to tie down any miscellaneous items onboard. The purpose of this is to make sure no essential gear is thrown around once the ship sets sail. Tasks like this are not something that comes to mind when imagining scientific research, but it is small details such as this that are critical to the success of the mission. If crucial instruments break during transit, the whole operation could be thrown for a loop. Other tasks we completed during the first few days included familiarizing ourselves with the boat, making introductions, and receiving tours and demonstrations of the instruments that are used to conduct research. This involved a CTD recovery and