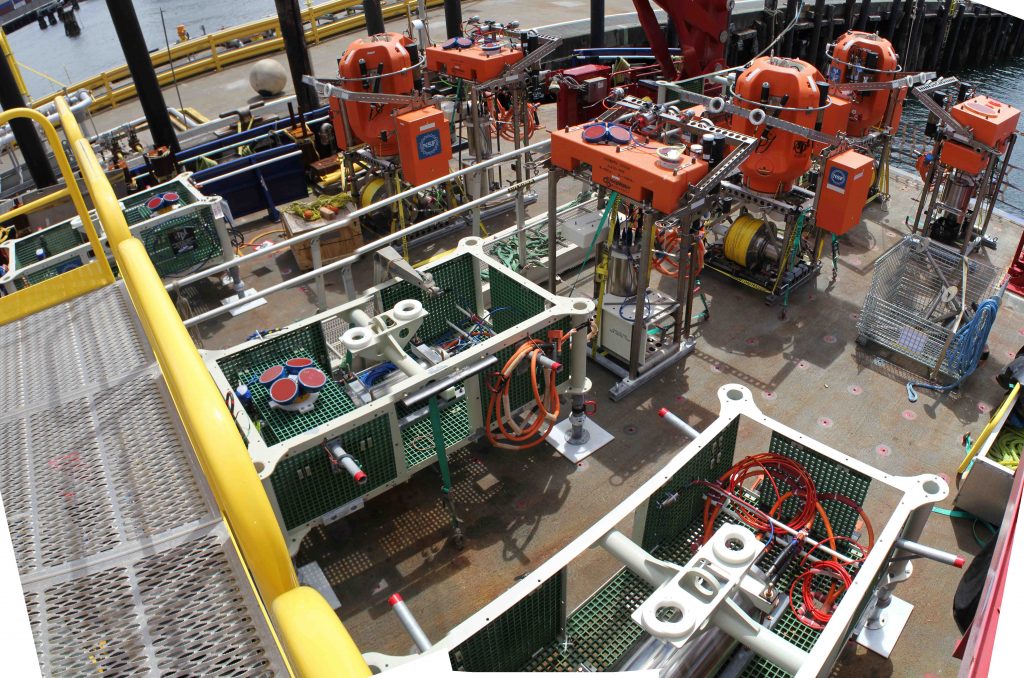 The second University of Washington Ocean Observatories Initiative Cabled Array Operations and Maintenance cruise (SKQ201610S) took place July 8-August 15, 2016. This 38-day, three-leg expedition utilized the R/V Sikuliaq and the remotely operated vehicle (ROV) Jason. During a series of 39 dives, 7 junction boxes, 6 science pods on the Shallow Profiler moorings, two Deep Profiler Moorings, and >100 instruments were recovered and reinstalled with other instruments and platforms. In addition, a Deep Profiler Mooring was recovered from the base of Axial Seamount. Fourteen CTD casts were completed for fluid sampling and instrument verification. The cruise completed all of its objectives.

Leg 1 (July 8-July 20, 2016): Major Focus – Turning of Shallow Profiler Platform Interface Assemblies and Science Pods. During Leg 1, Jason Dives J2907-J2923 were completed. Operations included turning of the Platform Interface Controller and Shallow Winched Profiler mooring components at Slope Base, Axial Base, and the Oregon Offshore site. In addition, the lower power and medium power junction boxes (J-boxes) at Slope Base (LJ01A and MJ01A), Axial Base (LJ03A, MJ03A) were turned. The mass spectrometer was recovered from Axial Caldera, and the digital still camera and CAT flow meter at Southern Hydrate Ridge were turned. A brief exploratory dive was conducted of Pythias Oasis. During Leg 1, a total of 127 instruments on the mooring platforms and seafloor were turned. Nine CTD casts were completed (CTD01-2016-CTD09-2016) to take water samples required for installation of the HPIES instruments (conducted at Slope Base) and for verification of the Shallow Profiler at Slope Base and at the Oregon Offshore sites. The Sikuliaq arrived back into Newport Oregon at the NOAA dock facility at 1400 on July 20, 2016.

Leg 2 (July 21-July 30, 2016): Major Focus – Turning of Seafloor Instrumentation. During Leg 2, Jason Dives J2924-J2937 were completed and all cabled sites were visited; 32 seafloor instruments, two Benthic Experiment Packages (LJ01C and LJ01D), a low-power junction box (LJ01B) and medium-power junction box (MJ03D were turned. IGT gas-tight samples were taken at the diffuse site El Gordo and high temperature vent fluids were sampled at the site where the resistivity-temperature sensor was installed, Escargot. A few sediment cores were taken at Southern Hydrate Ridge for shore-based physical property measurements. Dive J2936 was funded by NOAA and NSF with the goal of recovering a RAS mooring installed on the summit of one of the 2015 lava flows along the Northern Rift of Axial Seamount. The RAS was recovered and two vent fluid samples were taken with Jason’s titanium major samplers. Four CTD casts were completed (CTD10-2016 – CTD13-2016) for verification of mooring-hosted instruments at Axial Base. Weather was a significant issue near the end of Leg 2 with poor seastate and winds of 25-40 knts. Weather was poor across the Juan de Fuca plate-Cascadia Margin work area, requiring a longer steam to shore than usual (see below). All operations planed for Leg 2 were completed.

Leg 3 (July 31-August 15, 2016): Major Focus – Turning of Deep Profiler Moorings at the Oregon Offshore and Slope Base Sites, Recovery of the Axial Base Mooring. At the Endurance Oregon Offshore and Slope Base sites, each Deep Profiler mooring, consisting of a surface float; instrumented wire crawler; mooring cable; seabed docking station; acoustic release; and anchor, was recovered using a Medium Lift Winch involving extensive deck operations. At the Axial Base site, operations were limited to recovery of the Deep Profiler mooring without the wire crawler, which was retrieved earlier during the last stage of the 2015 Cabled Array Operations and Maintenance cruise. Additional operations included nine Jason Dives (J2938-J2946) mostly in support of the Deep Profiler operations. Other Dives focused on the recovery and redeployed of the zooplankton sonar at the Endurance Oregon Shelf site for troubleshooting, and the final positioning of the HPIES instrument at Slope Base. A single CTD cast (CTD14) was conducted at the Endurance Oregon Offshore site for post-deployment verification of the science instruments onboard the Deep Profiler wire crawler. All planned operations for Leg 3 were completed.