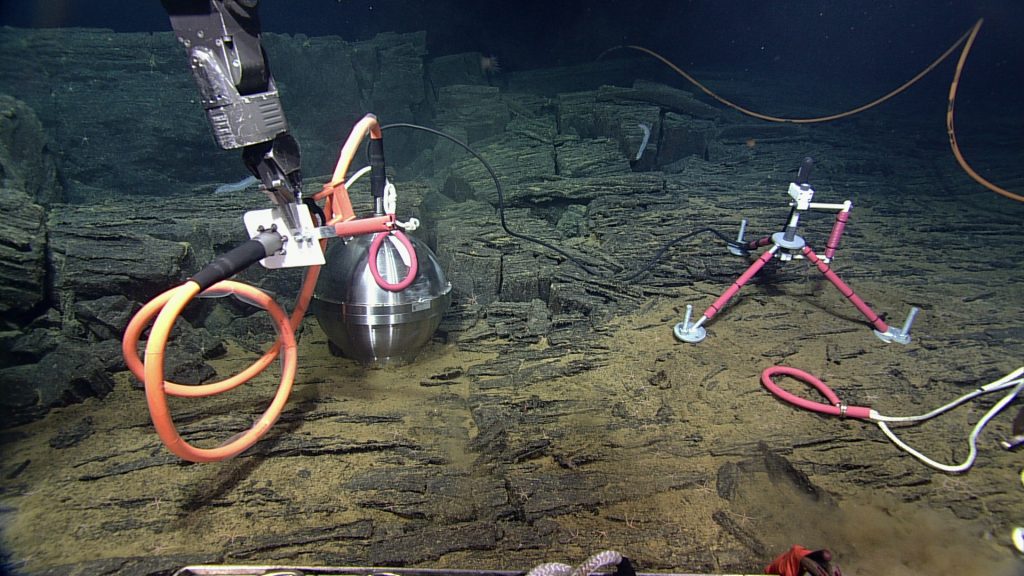 The Central Caldera site (~1526 m), located on a large inflated sheet flow, has become a geophysically-focused research site not only for OOI, but also for numerous researchers interested in deformation of the oceanic crust and development of instruments with follow-on vertical geodetic measurements of seismic-slip events along the Cascadia margin (i.e. the A-0-A instrument; see below). Dating by Clague et al., (2014) indicate the flow erupted ~ 1220 CE.

Monitoring of seafloor deformation by bottom pressure recorders (BPR), as part of NOAA’s NeMO seafloor observatory, are the longest duration for any submarine volcano, dating back prior to the 1998 eruption of Axial Seamount (e.g. Chadwick et al., 2006). A battery-powered instrument on the eastern side of the elevated flow measured a subsidence of 3.2 m during the 1998 eruption (Fox, 1999). Campaign-style expeditions, which have occurred nearly annually since 1987 have expanded the array of BPRs within the caldera and installation of an array of bench marks to monitor deformation inside and outside of the caldera (Chadwick et al., 2006). Monitoring of Axial deformation provides the first forecast of when a submarine volcano will erupt. Analyses of the data by W. Chadwick indicates that the volcano is set to erupt again between 2020 and 2021!  Please visit Chadwicks’ site, which provides a daily update based on data streaming to shore from the  OOI Regional Cabled Array bottom-pressure tilt instruments.

Cabled core instruments at this site include a bottom pressure-tilt instrument, broadband seismometer and a low frequency hydrophone. These instruments have been fully operational since 2014 and were instrumental in the live documentation of seismic events and inflation and subsequent collapse of the seafloor in the 2015 eruption (Nooner and Chadwick, 2016; Wilcock et al., 2016). Examination of hydrophone data by Caplan-Auerbach et. al., provides evidence for fountaining of gas-rich lava near this site in 2015, substantiated by a fine layer of ash (glass shards) on the bottom pressure-tilt instrument.

Since 2016, three NSF awards to PI’s have added instruments to monitor seafloor deformation and to conduct cross reference measurements of these new technologies. They include a flipping tilt meter (W. Wilcock – UW) and a self-calibrating pressure sensor (M. Zumberge and G. Sasawaga – UCSD-SIO), and a second self-calibrating pressure instrument [A-0-A (Wilcock)] to be installed in 2019. An important goal of these new technologies is to remove instrument drift components to obtain high-resolution pressure measurements. 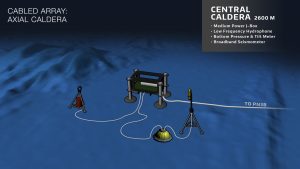 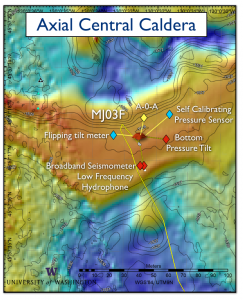 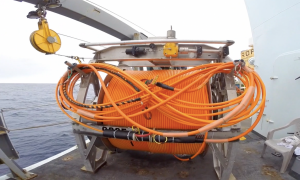 ROCLS with 4.7 km of extension cable, which was laid on Axial, from Primary Node PN3B to the Central Caldera.  Photo credit: Christina Ramirez, University of Washington, V14. 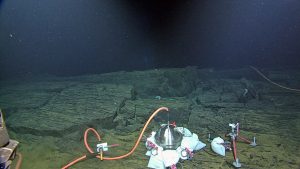 The broadband seismometer (left) and low frequency hydrophone (right) are installed on the floor of Axial Seamount at the Central Caldera Site. The 7-function manipulator of ROPOS is connecting the extension cable to the medium powered junction box. The white bags inssulate the broadband from acoustic "noise" associated with curents flowing over the instrument. 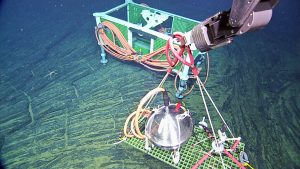 A broadband seismometer and a low-frequency hydrophone are being placed on a flat basaltic plateau at the Axial Seamount Central Caldera Site, awaiting connection to medium power J-Box MJ03F. On a follow-on dive a 4.6-km cable will be installed. This area is of particular interest because the caldera floor is rapidly being uplifted, suggesting that melt is migrating into the magma chamber below. Photo credit: NSF-OOI/UW/CSSF; Dive R1725; V14. 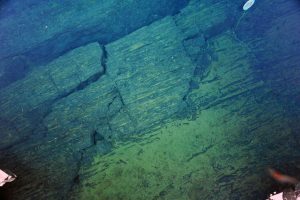 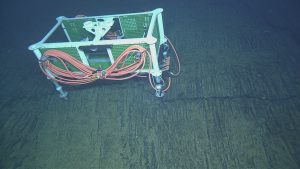 During ROPOS Dive R1724, the junction Box MJ03F was deployed at the Central Caldera Site. It will host a broadband seismometer, a low-frequency hydrophone, and a bottom pressure-tilt instrument suite. Photo credit: NSF-OOI/UW/CSSF; Dive R1726; V14. 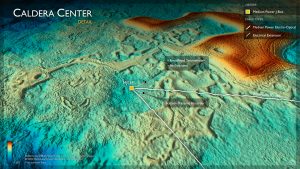 The cabled geophysical array at the Central Caldera Site is focused on measuring the inflation and deflation of the volcano, earthquakes, and the movement of of molten lava within the core of the volcano. Bathymetric data are from D. Clague and D. Caress, MBARI. Image Credit: University of Washington.
Close Panel