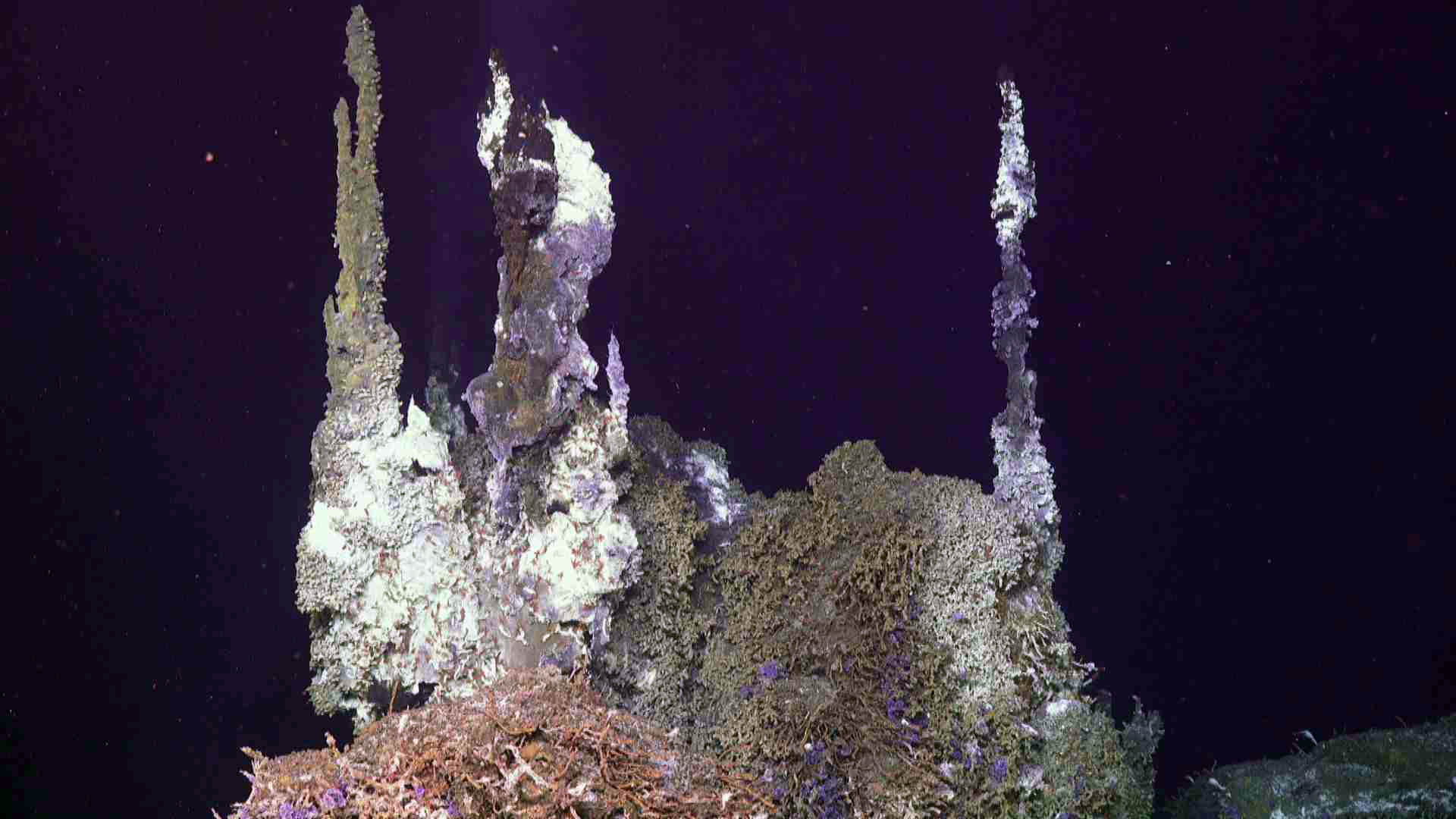 The ASHES vent field is located ~130 m east of the caldera boundary fault. Most of the hydrothermal activity is located in an area ~ 60-80 m across, within a small depression, with only a few meters of relief. The area is floored by fractured lobate flows and some sheet flows, with pillows more common around the outer perimeter of the field. Many of the narrow fractures are diffusely venting and support tubeworms, palmworms, limpets and rare clams. The ASHES field hosts numerous small chimneys (e.g. Mushroom, Inferno, Hell, Phoenix, Virgin) that are generally small (less than ~ 4 m in height) and typically host numerous, very narrow discharge orifices (<5 cm). The edifices are commonly covered in dense macrofaunal communities that are similar to those at the diffuse flow sites, but they lack clams. Many of the chimneys have remained similar in size since the late 1980’s (Butterfield et al., 1990; Hammond, 1990). New growth forms slender, highly friable spires that are rich in anhydrite, pyrite and zinc sulfide.

Fluid temperatures and chemistry, in concert with mineralogy and vent deposit chemistry define steep chemical and thermal gradients within the walls of the actively venting edifices. Hydrothermal fluids egressing from the chimney orifices show temperatures in excess of 275°C and rapidly entrain 2°C seawater as they exit the narrow spigots. Likely due to boiling, the venting fluids are relatively particle-poor compared to many high-temperature chimneys in other vent fields (Butterfield et al., 1990). The northeastern portion of the field hosts a < 1 m tall anhydrite spire (Virgin mound) bounded by a anhydrite mound that vents clear fluids and emits some of the highest CO2-rich fluids in the caldera (Butterfield et al., 1990).

Core OOI infrastructure at ASHES is focused on examining the relationships between seismic activity and fluid flow in diffuse and black smoker sites, and how changes in diffuse fluid temperature and chemistry impacts macrofaunal communities. The main focus sites for hydrothermal flow instrumentation are adjacent to the chimneys called Mushroom and Inferno, which are located ~ 10 m apart. A network of actively venting fractures (filled with bacteria, small tube worms and limets) that radiate away from Mushroom are a hallmark of this site.

A NE-looking high definition video camera (CAMHDS301) focuses on Mushroom imaging the entire chimney every 3 hrs, twice a month 24 hrs, and once a month for 72 hrs. A long-duration osmotic fluid sampler (OSMOA301), and a three-dimensional thermistory array (TMPSFA301) are located in a small diffuse flow site near Inferno. A tight array of two short-period seismometers feeding out from this site is designed to capture local seismic events beneath the field, with the goal of defining the nature of the upflow zone beneath ASHES. Daily histograms, locations and magnitudes of seismic events at Axial are provided by W. Wilcock, University of Washington.

In 2017, a bottom pressure-tilt instrument (BOTPTA304) and CTD (CTDPFB304) were also installed as PI instruments through an NSF award to W. Chadwick, Oregon State University and daily visualizations of uplift and estimates of when Axial will erupt again are provided on his website. In 2018, a multibeam sonar system (COVIS – Cabled Observatory Vent Imaging Sonar) was installed to image diffuse and high temperature flow at Inferno, Mushroom, and associated diffuse flow sites. The sonar was installed through an NSF award to K. Bemis, Rutgers University. 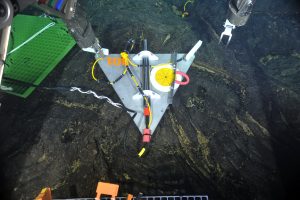 This short-period seismometer was deployed on a flat sheet flow ~ 1.3 km east of the ASHES hydrothermal field in 2013. The black ball in the yellow circle shows that it is perfectly level, helping to insure that the highest quality data comes off of this network. Axial Volcano is likely to be quite seismically active and we are anxious to get the real-time data on shore next year. This will help us understand magma and fluid migration in the subsurface of the volcano...and eventually these data may help us predict an eruption. VISIONS'3, Leg 4. Several earthquakes were detected in real-time during testing of these seismometers in 2013. Photo credit: UW/NSF-OOI/CSSF, V13. 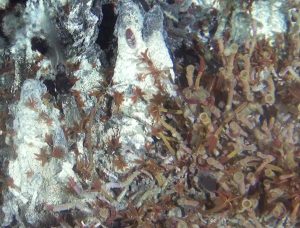 A close up of animals, including palm worms and tubeworms, on the hydrothermal chimney called Mushroom in the ASHES hydrothermal field. The image is a frame grab from video streamed during testing of the OOI-RSN high-definition video camera built by the Applied Physics Lab at the University of Washington. The camera has been at this site for 1 year. Photo credit: NSF-OOI/UW; Dive R1730; V14. 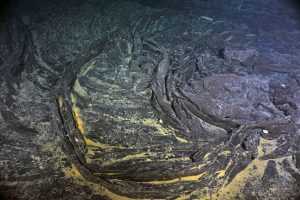 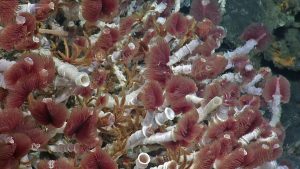 A lush community of vibrant red tube worms grows on a < 1 m tall black smoker chimney in the ASHES hydrothermal field. The tube worms, which are hosted in white housings about the diameter of your small finger,  are intergrown with brown palm worms.Credit: NSF-OOI/UW/ISS; Dive R1835; V15. 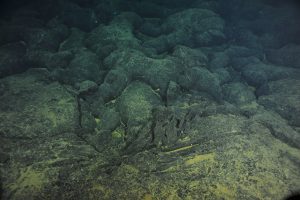 Cooling lava takes on different shapes, depending on the temperature and vigor of the flow.  Here, lava lobes, sheet flow and jumbled flow types fill the frame near to the Ashes vent site on Axial. (VISIONS '13 Dive R-1613) Photo credit:  OOI-NSF/UW/CSSF 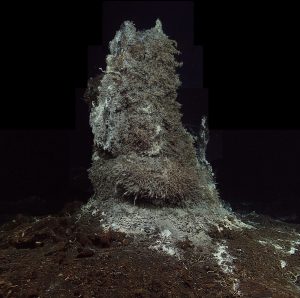 The Mushroom hydrothermal chimney at the ASHES vent field, hosts dense communities of limpets, a variety of worms (palm, tube, scale, sulfide), and filamentous bacteria. The chimney rises ~ 4 m above the seafloor. This mosaic was compiled by M. Elend, University of Washington from several high definition images. 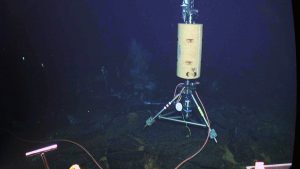 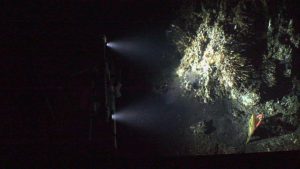 A shot of the newly installed HD camera lighting up the face of the actively venting Mushroom chimney in the ASHES hydrothermal field. Credit: UW/OOI-NSF/WHOI; V17. 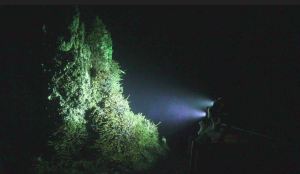 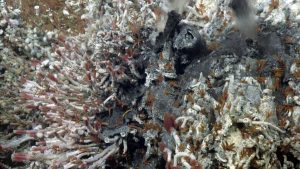 Small spigots on the ~4 m tall vent called Mushroom issue clear high temperature fluids. Healthy communities of sulfideworms and tubeworms cover the outer surfaces of the chimney.  The tubeworms have no mouth or anus, but their tubes are filled with symbiotic microorganims that process carbon which sustains the worms. 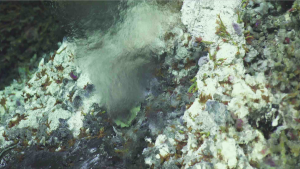 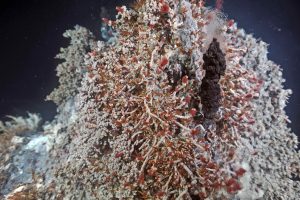 An active black smoker on the hydrothermal chimney "Mushroom" is surrounded by a dense colony of beautiful tube worms. Credit: UW/NSF-OOI/CSSF
Close Panel