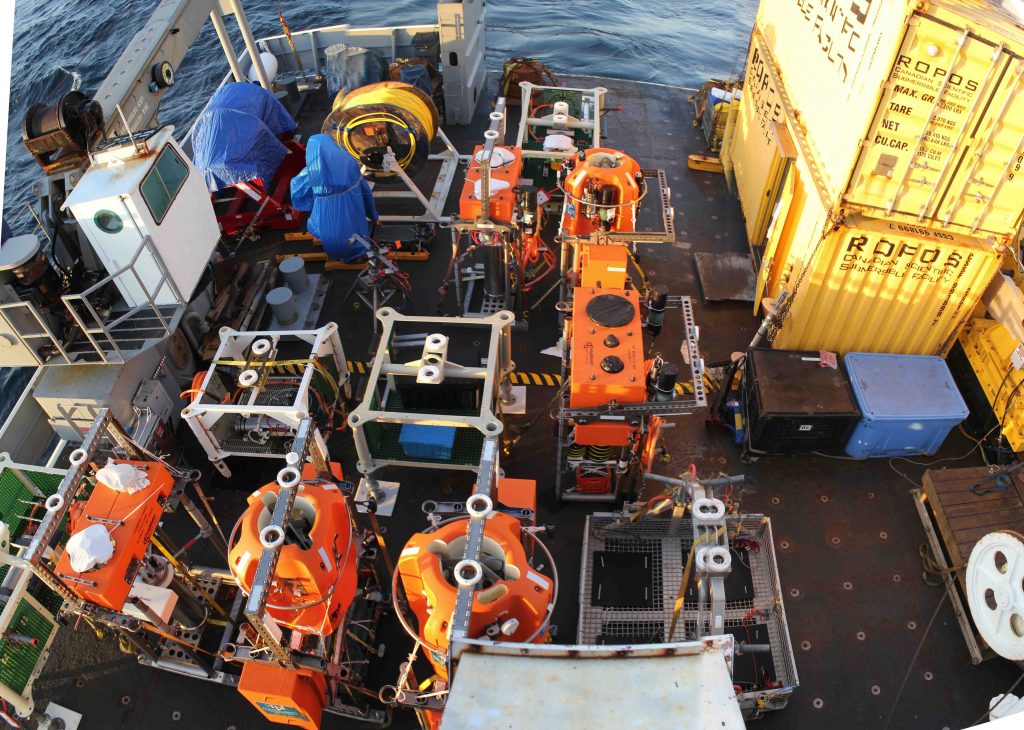 A total of 130 instruments and 13 platforms were installed. This infrastructure includes:

In addition to completing installation and maintenance tasks, during the cruise the team was able to make several scientific discoveries including the discovery and documentation of a new substantial seep site on the continental margin and the first visit to the site of the April 24th, 2015 Axial Seamount eruption. The seep was discovered by a recent graduate of the University of Washington undergraduate Oceanography program during Leg 2 of the cruise and is unlike any yet discovered.

The eruption site was delineated using the Thompson’s EM302 system. The flow is >7 km long and up to 127 m thick (~ 2/3 up the height of Seattles’ Space Needle) on the northern rift zone of Axial Seamount. There were hints that thin flows erupted within the caldera itself.  The summit of the thickest lobe of the flow was covered by large expanses of orange bacterial mats, with more localized areas of white, filamentous bacteria in areas of more focused flow in the interstices between individual pillow basalts.

Similar to previous years, the hard work of 20 undergraduate students and one graduate student from the University of Washington, Grays Harbor College, Oregon State University, and Western Washington University significantly contributed to the cruise. The students were dedicated data acquisition loggers in the ROPOS control room and were instrumental in video and digital still image documentation of all shipboard operations, as well as documentation of all instrumentation and platforms that were installed and recovered.