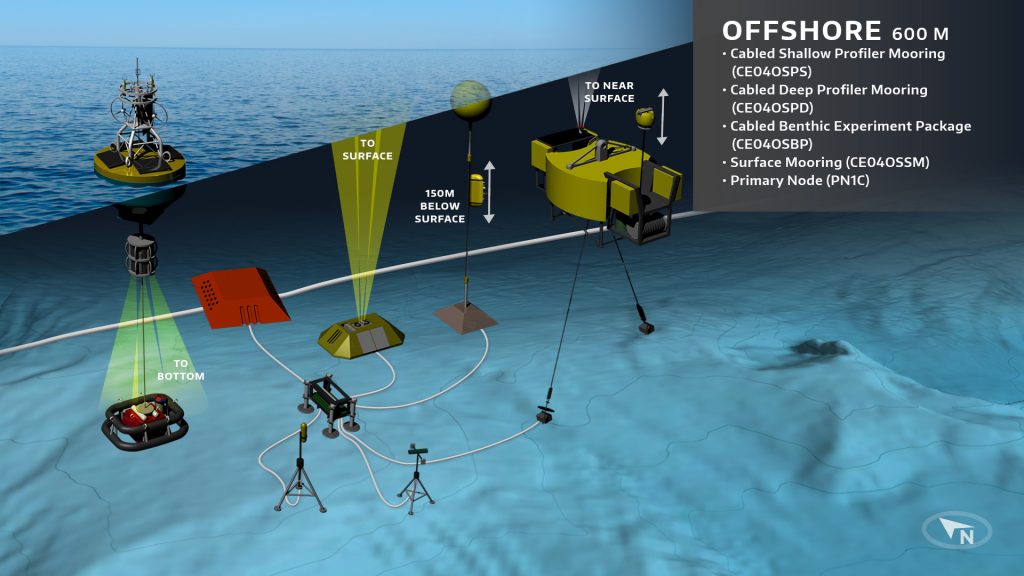 The Oregon Offshore site (600 m depth; ~40 miles west of Newport, OR) includes both uncabled and RCA infrastructure, and utilizes fixed and mobile assets to observe cross-shelf and along-shelf variability in the coastal upwelling region of the Oregon and Washington coasts. This site is designed to examine biogeochemical and physical oceanographic processes within such highly productive coastal environments. Specifically, the impacts of wind-driven upwelling of nutrient-rich currents on biological communities and hypoxia events. At the offshore site on the continental slope, zooplankton migrate on a daily basis from a depth of a few hundred meters to the surface, wind-stress curl and offshore eddies interact with the coastal circulation, and a subsurface undercurrent moves poleward.

As with the uncabled Endurance Array sites, the Oregon Offshore site contains fixed sensors at the top and bottom of the water column paired with an adjacent water column profiler. Mooring lines provide synoptic, multi-scale observations of the eastern boundary current regime. Coastal Gliders bridge the distances between the fixed sites and allow for line transects and adaptive sampling.

The coastal ocean off Oregon is characterized by a relatively narrow shelf, upwelling and downwelling driven by wind, and fresh, buoyant water emerging from regional rivers (Trowbridge, et al., 2019). The most important of these is the Columbia River, the largest source of freshwater to the US west coast, and a major focus of the Endurance Array. Regional mesoscale variability is forced by bathymetry, fluid dynamical instabilities, and coastally trapped waves. At the largest scales, year to year variability is caused by fluctuations in the tropical Pacific (e.g., El Niño Southern Oscillation), as well as variations in the large-scale circulation of the North Pacific (e.g., Pacific Decadal Oscillation).

The regional ecosystem is a part of the larger California Current Ecosystem (Mackas, 2006), and is both chemically and biologically variable. Oregon and Washington coastal waters are home to a diverse range of fisheries that rely on the transport of nutrients into the euphotic zone via upwelling deep water. This injection of nutrients leads to blooms of phytoplankton, which form the base of the oceanic food web. The arrival time and scale of the spring-summer upwelling season is crucial to the regional ecosystem. Interannual variability can also cause swings in population dynamics, for example between northern, “fatty” zooplankton and southern, “skinny” zooplankton (Peterson and Schwing, 2003).

In recent years, hypoxic and even anoxic events have regularly occurred off Washington and Oregon as they have in upwelling regions worldwide (Grantham et al., 2004; Chan et al., 2008). During these same years, the threat of Ocean Acidification to marine organisms in this area and across the California Current Ecosystem has become very clear (Feely et al., 2008; Barton et al., 2012; Klinger et al., 2017).