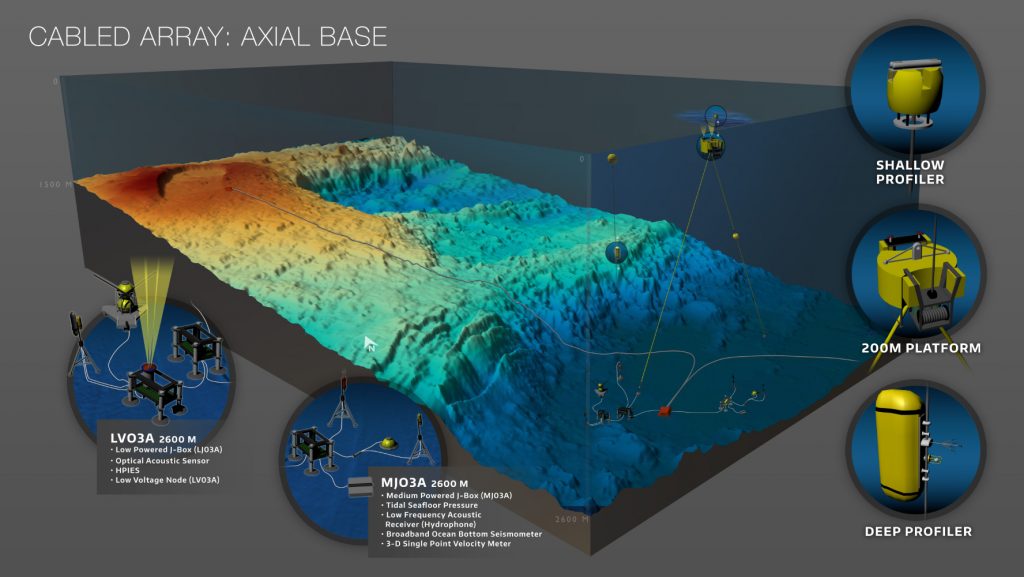 The Axial Base site is located at the southern foot of Axial Seamount, an active volcano off the coast of Oregon. This site is far from the continental shelf (>350 km) and reaches depths of 2600 meters. Therefore, it represents an open-ocean or pelagic site in the continuum of observing scales represented in the OOI’s cabled system.

Here, large-scale currents including the North Pacific Current, the subpolar gyre, and the northern end of the California Current interact. These currents transport heat, salt, oxygen, and biota, all of which are crucial to the region’s ecosystem. The currents are also highly variable, due to shorter-term changes in tides and winds as well as longer interannual (El Niño) to decadal (Pacific Decadal Oscillation) timescales.

The technology deployed at this site was designed to answer relevant science questions represented in the OOI Science Requirements, including: 1) How, and how strongly do tidal currents break down into turbulence, and what are the feedbacks on the large scale current system? Internal tides are ubiquitous vertical motions formed by tidal currents flowing past bottom features such as Axial Seamount and the base of continental margins with steep topography; 2) What are the impacts of long- and short-term forcing changes on the structure and transport of the large-scale current system?; and 3) What are their effects on the ecosystem?

An additional focus is on monitoring plate scale seismicity and local earthquakes associated with magma migration within the volcano, as well as spreading events along the Juan de Fuca Ridge and far-field earthquakes.