Wiring the Base of a Volcano 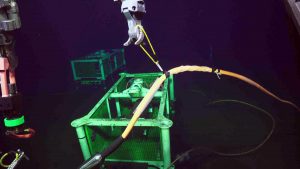 Early this morning, following a 16-hour steam from Slope Base, the Atlantis arrived at a spot 2600 meters above the foot of the largest and most active volcano (Axial Seamount) off the Oregon-Washington Coast, and Jason started its descent. It takes about 2 hours to dive through the water column to the seafloor at this site, dropping through nearly 3000 meters of seawater, crushing pressure, and darkness.

The first dive of the day was a long one: ~10 hours to replace the electro-optical cable (which provides power and data communication) that runs between the Axial Base low-voltage node (a small substation on the seafloor) and the bottom of the profiler mooring that was deployed during Leg 1 of this cruise. 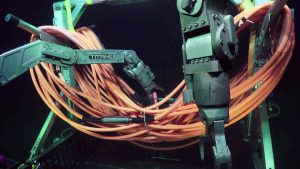 First, the new cable was brought to the seafloor looped on an “undervator”: a platform that latches beneath Jason to transport heavy or cumbersome equipment down to the ocean floor and back up to the ship. Then Jason started laying out the new cable between the mooring and the node and plugging in the connectors. A quick survey showed that the anchor to the mooring was installed ~ 12 ft from the target deployment site – an amazing feat as it was lowered off the side of the ship 8500 ft down, landing almost on top of the designated target. 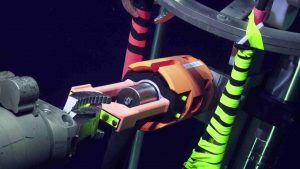 After a quick survey to make sure that the cable wasn’t caught on anything or looping over other cables, Jason began coiling up the older cable and putting it back on the undervator for retrieval.

Once the new cable was connected, Jason conducted a short dive to plug in the new Axial Base profiler and controller computer: the ongoing dive is to install the winched Shallow Profiler Platform, so that we can start profiling the water column at this site.

Following this dive, we will transit two hours to the summit of the volcano ~ 4500 ft beneath the ocean floor and see a very different landscape – kilometers of glass-covered lava flows from which rise active hot spring deposits. This is none of our favorite places to work! In the very early morning hours we will install a new HD camera and recover a sampler that has been collecting low temperature fluids from a diffuse vent site for a year. Here,  hydrothermal vents issue superheated water rich in metals stream out of the seafloor, and upon mixing with near freezing seawater metals precipitate out forming 12-14 ft tall deposits alive with microbes and animals. The warm fluids provide nutrients for communities of bizarre, chemosynthetic organisms living inside tube worms. These bacterial symbionts digest sulfide and other compounds. The students (and the scientists) are excited to visit this unique site and observe animals and geological formations that very few have ever seen before.

In the meantime, there is plenty to get ready for the next series of dives, and the engineers and scientists are busily preparing the instruments and staging equipment on the back deck. Luckily, the weather is flat calm, the sun’s out, and conditions are perfect for doing science.