We finished up at Axial Caldera today, with the final Jason dive wrapping up before I woke up. I helped out a bit with a CTD cast, but mostly I practiced knots and wrote up a guide to photodocumenting the dives for the next crew of undergrads. I appreciate how much time I have throughout the day to segment into the various activities I brought along, like math practice, spiritual readings, casual readings, knot practice, and general talking and hanging out!

On land I always feel like my tasks are so squished together that if I want to do any of these things, I need a patch of time 3-4 hours long to even justify starting. Here, I just direct my attention to each thing for an hour or two each day and cover multiple topics a day! I am liking this bite sized engagement with all my hobbies.

We started our 17 hour steam back to Slope Base before my shift. The evening was spent updating logs and processing highlight pictures from the dives. Going to attempt to tie a monkeys fist later!

Woke up on the best side of the bed today, have been full of joy from the moment I rose! Last night I was pretty stoked for reaching the hydrothermal vents. We completed the dive at Axial Base during my shift and began transit to the caldera site.

The night was unusually beautiful, according to the crew. Calm waters, warm air, clear skies, and stars. A group of us stood watch on the stern of the ship during transit, observing the rainbow banding the horizon and hoping this patch of high-altitude clouds would be meteoric dust traces. The fading light casts noctilucent clouds in a teal blue hue when all the light has left the rest of the sky. No luck last night, but it was such a treat to feel the Pacific and the sky expanding around us. I’m always surprised by how close the horizon looks in every direction; you can tell the Earth is curved out here.

We passed more of the transit time with card games and shows. Despite it being midnight the group of us staying awake were alert and energetic. Chelsea and I resumed our post at 12:30 when the next Jason deployment began. And we ended our shift at 12:45 when the relief took over. The dive would take almost two hours to get set up to survey the hydrothermal vents, so I split for a phone call and shower. I hurried upstairs with my hair still sticking in every direction from the shower, only to discover Jason had lost power during the dive and they were benching the mission until the morning! Even though I spent five hours passing time for this dive, I wasn’t really bothered by it. Chilled with Hayden and Lauren while they waited for an update and watched the delightfully odd skits of Monty Python’s the Meaning of Life. Finished up the day at 3am!

I got up 8 hours later (really charging up on sleep on this cruise) and was already in the Jason control room less than 10 minutes after waking up. Oh man I was lucky!!! They were starting to explore some of the vents right when I came in. I don’t remember breathing.

The rest of the day was flashes of conversations and laughter and half studying my mathematical modeling textbook.  During my shift we dove to the seafloor 1541 m down and preformed the precarious operation of recovering a large instrumented platform called COVIS on a winch underneath Jason.

One facet of my existence is this bucketload of food sensitivities. Nature was not kind in forming me. Grains, eggs, dairy, corn, soy, peanuts, most beans, coconut, it keeps going. Last night I ate the best rice of my life! And it turned out that’s because it was the sweet taste of wheat. Each sensitivity manifests differently, but gluten is special in that its like a shotgun hitting every one of my systems! It feels like that moment right after you wake up where your brain is foggy and distant and disfunctional, and you can’t really get your limbs to do what you want, and everything feels puffy and weak and inflamed. I was knocked out for 12 hours before I could get myself out of bed, and then it was a struggle to start the day. I came up for our student meeting and a tour of the engine room.

I got some brain cells back after a few hours, and helped my project group conduct interviews to three people. Getting to hear how members of the science and engineering teams think about maritime life and their pathway to where they are now helped clarify my questions and lurking feelings of being too late to join the party. I’m excited to continue to work on this project and make a video for anyone who discovered oceanography after their freshman year of university!

My shift tonight will cover some installation dives with Jason, and later we will start moving toward the ASHES hydrothermal site, the whole reason I started getting interested in oceanography and geology in the first place. Can’t wait for the ROV to get to the ocean floor in the morning! 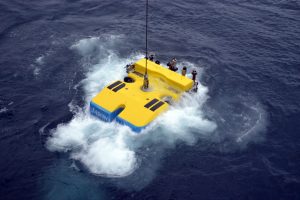 Today has been uneventful. Jason operations concluded overnight, and we steamed two hours to a new site, Slope Base. The same operations were repeated on another shallow mooring. The dive was almost completed by the time I woke up since Jason runs 24 hours. The Atlantis is currently on a 16 hour steam to Axial Base.

The undergrads had our first student run meeting. We broke down our project ideas, and a more experienced student helped steer us away from topics covered by other students. I formed a team with Kailey and Ramya, and we planned out our vision, interview script, and video breakdown. While everyone weathered out the transit, we started planning interviews with the scientists, engineers, and crew.

Now that we have a solid idea in motion, I feel more prepared for the coming days! The sea sickness hasn’t been as rough as yesterday, but I’m still drowsy and a bit nauseated. It’s a good day for reading

Today the Atlantis hits the open ocean. AKA the cellular exclusion zone. Made some phone calls to my loved ones. The boat started while I was on a call and I hadn’t even noticed we were in motion! Oh if only that lasted… Sea sickness quickly absorbed me, as I feared. Weathered most of it in the lab (shared suffering trumps solo). After an hour of motion, the Jason team gave a walk-around of the ROV and the control box. The whole team looked pretty queasy; I wasn’t digesting much information. After the meeting I attempted to work on my student diary in my berthing. Which actually means throwing up repeatedly! The boat ran a fire drill and abandon ship drill. Felt like a puppy in my survival wet suit, with big floppy feet and hands! Got too hot in the suit, had to puke again.

Then, miraculously, the boat reached its destination after the 5 hour steam. After the ship stabilized all the symptoms cleared up. My day really started at this point, both mentally and task wise. I helped with the preparation, recovery, and sample collection from the CTDs. The sampling felt long, but we had to learn a fresh procedure for five different measurements. Next time will be faster as we get in the rhythm of the procedures.

One of my favorite times of day is meals. People sit all mixed up and you get to interact and hear their stories. Today I talked to a gal who’s in her sophomore year of undergad training to be a captain! I didn’t even know there were programs available to get involved so young! Settled in the Jason control box to update my field notebook and student diary before my first shift logging for Jason.

During my shift, I learned how to photodocument the dive process. This basically entails staring into the control screens absorbing every movement of Jason and clicking a button every second when Jason’s interacting with something. At the sites visited today and tomorrow, Jason is replacing the PIA and SPA on a mooring 200 meters below the surface. When Jason came above the surface, I grabbed a camera and documented the retrieval of Jason and sensor. On board, the crew releases the old sensor brought up with Jason and secures a new one to the ROV to connect to the mooring. It is important to document every step of the Jason dives to track what’s happened many years down the line.

These first days on the ship feel endless; everything is new and novel. I prepared for this voyage by explicitly not thinking about it: not allowing expectation formation to occur. I knew the Katie Hill of two days ago simply did not have the experiences to construct a decent mental model of ship-based life and science! Since boarding last night, I have been exploring the ship, getting accustomed to traveling up and down more than laterally (for stairs always keep one hand on the ship and one hand to carry), and getting a sense of ship life from the various groups of people on board.

Last night I ended up talking to a ship engineer Bruce for over three hours about the devolution of the fishing industry in Maine, his thoughts on sticking with one ship and crew long term vs hoping ship to ship like he does now, and later on he shared the oscillatory nature of his life between sea and home. The months at sea chip away at the life established on land. I hadn’t thought about the trade-offs of an isolating vocation like offshore fishing and research voyages. Talking to Bruce reinforced the significance of being there and sharing experience with people both for fostering relationships, and for supporting a satisfying life.

The crew of undergrads is still working out ideas for projects. After last night I am thinking about the different perceptions of ship life offered by the boat crew (permanent and migratory), the science team, the Jason operators, the SSSGs, and the chefs. Kailey and I are thinking of making a short documentary about the different life experiences contained within this boat ecosystem.

Today we continued to adjust to the boat. We had a morning safety meeting and boat overview, with training videos. Orientation was followed by lunch and lashing down the main lab and storage room. We learned about deploying, retrieving, and operating Conductivity Temperature Depth probes (CTDs). I’m much more oriented towards hands on operations vs tech work.