This summers’ Regional Cabled Array (RCA) 44-day expedition set a record for operational infrastructure, number of Jason dives and logistics. The RCA cruise AT42-12 (May 30-July 12, 2019) was highly successful with the completion of all tasks scheduled for the annual maintenance and operations expedition. One hundred forty-nine out of 151 RCA Core and PI instruments are operational, all three instrumented Deep Profiler vehicles and instrumented Science Pods on the Shallow Profiler Moorings are conducting daily traverses through water column, and 113 RCA instruments were installed.

Over 53 days of staging and demobing for the cruise for the four legs, sixteen 48-ft trailers, and six 16-ft flatbed trucks moved 166 tons of RCA equipment to and from the Seattle, WA and Newport, OR. Onboard staffing included 52 personnel with 13 students, six non-OOI PI’s-technicians from four institutions and one member from industry. In addition, Susan Casey, a New York Times bestselling author (i.e. The WAVE, the Devils Teeth, and Voices of the Ocean) participated on Leg 4. As part of the NSF Oceans Month, a 1-hour "Science in the Deep" Facebook live interactive broadcast was conducted, including live streaming of imagery from Jason working at Southern Hydrate Ridge and a period for questions and answers. 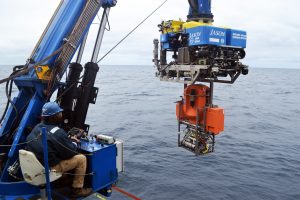 There were 58 Jason Dives, with a record setting 20 dives in five days including deep dives to 2600 m and 2900 m water depths. Vehicle turn-arounds were often less than an hour. The vehicle worked extremely well and the Jason team was highly efficient in installation and recovery of instruments/infrastructure. The Atlantis crew also provided exceptional support. The RCA team gives a big shout out to both Jason and the Atlantis for jobs well done and to contributing to this highly successful cruise.

Another big success for this summer occurred during nine days of operations dedicated to turning and installation of instrumentation and science funded outside of the OOI program. This work included the

The RCA engineering and science team is enjoying being on land after conducting round-the-clock operations to insure that the facility work was completed on schedule. Folks are enjoying the Seattle sun and the Cascades and Olympic mountains during the summer blue-skied days. Soon, our thoughts, however, will be turning to refurbishment and planning for next years cruise. The team is looking forward to working with the VISIONS19 students on their projects this upcoming academic year, and is excited to see the stories they tell with their new eyes focusing on the oceans, the RCA and OOI.