When thinking about the ocean, most people picture either the shore and the surface (beaches, waves, sunshine, fishing, etc.) or the seafloor (sand, mud, sea stars, kelp, strange deep-sea creatures). However, the ocean covers over 70% of the Earth’s surface (139,434,000 square miles), and has a total volume of roughly 320,000,000 cubic miles, so there is a vast expanse of water in between that is relatively unknown and difficult to study. It contains life, water currents, and chemical gradients that affect transport of heat, chemicals/nutrients, plants, and animals between the atmosphere, surface waters, and seafloor.

There are several fairly recent technological advances that provide scientists with the ability to study the midwater in greater detail than ever before, including robotic submersibles (like the Jason ROV, and the autonomous gliders used in other parts of the OOI), profiling floats (which are released into the water, move up and down using a buoyancy engine, and float where the currents take them), and instruments lowered from ships through the water column (like the CTD rosette onboard the R/V Atlantis). Most of these are moving samples or single records, which provide a snapshot in time of a single location or a broad area, but don’t always tell the whole story of how local conditions change over time.

The OOI Regional Cabled Array is attempting to remedy that by deploying cabled profiler moorings at three sites of interest: at the base of the “subduction zone” (Slope Base – 2900 m), where the Juan de Fuca plate is being pushed underneath the North American tectonic plate; on the Oregon Margin (OR Endurance Offshore – 600 m), where coastal waters, fresh water from the Columbia River, and cold, deep, nutrient-rich water mix; and at the base of Axial Seamount (Axial Base – 2700 m), an active volcano, where cold deep water gets forced upward when it hits the base of the underwater mountain, and is heated by volcanic activity. Each site hosts a cabled Deep Profiler and a Shallow Winched Profiler Mooring. The moorings are designed to measure global and local currents, megaplumes (where hot water from volcanic areas rises in giant columns from the seafloor), ocean chemistry (e.g. pH, CO2, nutrients), movement of heat from atmosphere to the ocean and back, thin layers (bands of water with the same chemical and biological properties only tens of centimeters thick, but kilometers wide), and biological parameters (e.g. distribution and changes in microscopic plants and animals).

On this leg of VISIONS ‘19, we are deploying new Deep Profiler vehicles (McLane profilers modified by UW-APL) on the mooring lines. The profilers are six-foot high yellow pods that use a traction system to crawl up and down a single, cabled, vertical mooring line at a rate of 25 cm per second. Power and data transfer are provided to the vehicle via inductive coupling at a docking station near the seafloor. The profiler hosts six scientific instruments (CTD, oxygen, 3D single point current meter and temperature, and two fluorometers measuring CDOM, chlorophyll-a, and optical backscatter) and moves through the water column along the mooring cable, continuously sampling ocean characteristics over a specified depth interval (150 meters below sea surface to near bottom, with the overall depth dependent on the site).

APL and the Jason team have created a 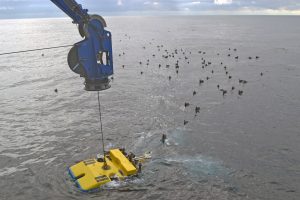 A squadron of albatross wonder what large yellow creature rises from the deep. Credit: M. Elend, University of Washington; V19.

The Endurance Offshore (600m) Deep Profiler has already been turned successfully, and is communicating to shore and running short test profiles. We’re now heading to Slope Base and Axial Base, which will be longer dives, but the same overall plan. Stay tuned for further developments, and follow along later in the week as we travel to Axial Caldera, an underwater volcanic crater full of lava flows and hydrothermal vents!