Early morning ascent time! The morning began with finishing up another shallow water profiler dive, though this time we were tasked with taking a photo survey of the instrument before ending the dive, which was much more hands on for us students. It went smoothly and we got to talk to the ROV pilots more so than we have been able to in the past, which was nice.

After the morning shift ended I took a nice long nap before waking up for lunch and some relaxing time. Today, we finished the huge puzzle in the lounge which felt like a big accomplishment towards all who worked on it. We also got a tour of the ROPOS by one of the senior pilots. It was nice to get a better understanding of the primary piece of equipment we use throughout the cruise.

After that we had a quick tour of the bridge, this time with everyone. It was another beautiful day so I hangout on the bow of the boat again with a few other students to soak up the sun and warmer weather. It was time for my shift to begin again, and it was much more involved this time.

Abby and I were tasked with wrapping wires with insulation on the RAS/PPS unit that would be going down on a dive in the coming days. We also got a nice talk from Jim, the lead of OOI at Woods Hole, about marine meteorology. I took a class about fluid mechanics last fall and was surprised at the amount of overlap between the two subjects. Its always nice to find out how connected our world is!

August 10: My day began again at 4:00 in the morning to take over the logging shift for the ROPOS. It was a fairly easy dive that consisted of the crew hooking up an extension cable to one of the primary nodes. Again, I got on shift towards the tail end which left me extra time to grab breakfast, do a COVID test, and catch up on any work before I settled into my end of shift, 8 o’clock nap.

By the time I woke up, the sun was shining for the first time since we arrived in Newport! It was warm out and everyone was out on deck soaking up the sun. As we looked over the ocean, a little shark swam by the surface to give us all a little show. Julie gave us a quick rundown on how the CTD rosette works before a few other students and I went up to the bridge of the boat for a quick tour by one of the mates. I was able to have a chill afternoon before starting my next shift which was much more involved. For starters, I was given another lesson on how to collect samples from Niskin bottles (that are on the ROPOS and the CTD rosette). When I returned to the ROPOS control room, there was an obvious issue. Someone had left a few crab pots only a few meters from where the SPA (shallow water profiler) the ROPOS was working on was positioned. It took coordination from both the pilots and the ship captain to position the ROPOS so it wouldn’t get caught in the crab lines. The rest of the dive went smoothly, and we got to see a ton of feather stars, urchins, sponges, and a nudibranch that grew on the SPA over the course of a year. At the very end of the dive, there were issues with the crane which caused another backup with the dive but was fixed relatively easily, albeit it took a long time.

When the ROPOS was finally back on deck, Abby and I got a chance to use our new Niskin bottle skills to collect samples off the ROPOS. With this marking the end of the shift, most people went out on deck to enjoy the first sunset we’ve been able to see since coming aboard.

August 9: My first early morning shift began with logging the end of the first dive. It went smoothly! After the ROPOS was secured on deck, Abby and I helped Julie Nelson collect samples off the machine. The samples were collected in two Niskin bottles. One was for an oxygen reading and the other was for salinity. It was a very wet experience, but cool to see the ROPOS up close and personal.

Because the dive ended at the beginning of my shift, the majority of it was spent during transit. During this time I took the opportunity to talk to a post-doc on board who was working with microbes around the hydrothermal vents. They’re hoping to put together an evolutionary tree of the cells they collect around the vents using DNA. My interests in oceanography lie mostly in biology, so I hope to use the data they collect on my own project. I then went out on deck with some other students during a bit of downtime as the ROPOS is set up for its next dive, where we saw a few whale spouts and birds. The was rising but the clouds made everything a light grey; it was very peaceful. Before my next shift started I was sure to nap, eat a hearty lunch, and work on the puzzle in the lounge room.

Our shift was during the tail end of a dive again, but this time we were able to see the primary node and there was a huge white octopus chilling out on top as the pilots finished up. This left Abby and I with plenty of time to work on our blogs, project proposals, and help the scientists prepare for the next dive in a few hours. 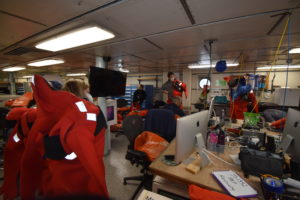 August 7: Its cruise day! I had to wake up at 6 this morning to meet my fellow students and some of the scientists. The drive down was relatively easy as I slept through most of it, only waking up for a lunch stop. Driving up to the boat was so exciting; people were working everywhere to get everything on board and the ship looks way bigger in person. I was able to meet a few people on board working as crew, engineers, scientists, and other students. Everyone was very willing and excited to explain their roles on the ship. My roommate Abby and I explored the boat together but got thoroughly lost trying to find our way back to our room. The easiest landmark to orient ourselves is a big, sprawling octopus mural in the hallway next to the main lab. We had a brief meeting about the basics of the ship before we chugged some dramamine and went to bed for another early morning tomorrow.

August 8: We woke up at 8 this morning for a lab safety meeting and to try on our immersion suits. The suit was way too big for me and made me look like a giant floppy bright red lobster but luckily they had extra smaller ones for me to swap out for. It was a busy morning for everyone to get ready before we set sail at 10:30. Our job as students during this time was to help strap everything into place. The morning was incredibly foggy but made for a beautiful Oregon landscape as we left Newport. As the waves got bigger, we went out on deck and tried to jump with the waves to get huge air but were only mildly successful. My shift schedule is 4-8 am/pm so I took a nap and waited for us to arrive at our first station, Slope Base. While we were waiting, Andrew and I translated my last name, Somol, using a biological term dictionary and found it meant body odor 🙁 (som- meaning body, ol meaning smell or odor).