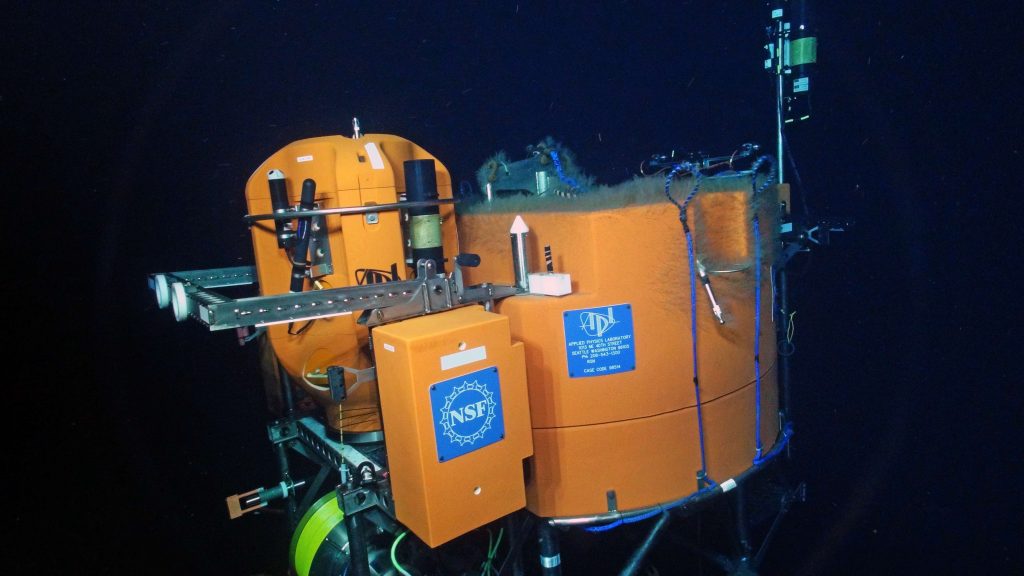 On August 4th, 2020 the RCA and Jason teams completed turning of the instrumented Platform Interface Assemblies and winched Science Pods on all three cabled Shallow Profiler Moorings located at the Slope Base, Oregon Offshore, Axial Base sites. These one-of-a-kind, two legged moorings are truly state-of-the-art technologies that have a phenomenal history or working: numerous other organizations have attempted to make/deploy shallow profiling moorings, but none have achieved the operational success of those designed/built/installed by the UW Applied Physics Laboratory RCA engineering team.

The three moorings, in total host a diverse array of 51 instruments that provide real-time data on climate change, ocean acidification, marine mammal vocalizations, nutrients, biological communities etc. Because the instruments are not limited by power or bandwidth considerations, most instruments stream measurements at full capabilities (from 1 sample/sec to 256,000 samples/sec).

This year, history was made on Jason Dive J2-159, which recovered the winched Shallow Profiler Science pod from the 200 m platform at the base of Axial Seamount: this is the only site in the worlds’ oceans where continuous water column measurements are made spanning 2600 m of ocean water.

Watching in real-time from shore (August 4, 2020 8:07 local), Eric McRae, one of the engineers leading the mooring efforts wrote

“I am writing this as the Jason ROV is latching into the Axial Base Shallow Profiler in order to bring it back to the ship for replacement.  This profiler has been the Eveready Bunny for the year.  It was switched into autonomous mode on June 20th of 2019 and since then completed 3462 profiles from its parking position at ~193 m to near the surface.  During that period, the winch drum made 732,010 revolutions, handling the equivalent of 1267 km of cable (note equal to 4,156,824 ft!)…..the unit has been flawless in operation for more than a year.”

Eric has been the lead in turning winched profilers into innovative ‘smart’ platforms. This is critical working in the NE Pacific where storms can easily generate waves >30 m in height or more that transmit significant energy into the subsurface. In addition, strong currents can “blow” the profiler science pods over as they traverse the upper 200 m of the ocean. Hence, Eric created smart software routines that control autonomous operation of the profilers. These routines utilize real-time feedback of the sea state provided by science and engineering sensors on the moorings, which translates into automated responses by the underwater winch controls that spool out or bring back in the fiber optic cables connecting the instrumented science pods to the computer systems inside titanium housings on the platform.

A good example of this, provided by Eric is from a storm on January 1, 2020. The wave estimation software predicted 17.5 m waves. In response to this, the system turned the Science Pod around at 50 m water depth. On February 23rd, the system detected a cross current strong enough to tip the science pod over at too steep of an angle, so the pod turned around at 55 m and headed back down.  This was at a time when waves on the surface were estimated at 3 m.  These are just a few of the features of this machine that help make these moorings robust and so successful. Since 2015, they have completed >40,000 profiles at sites located 42 to 250 nautical miles offshore with corresponding depths of 600 m to 2900 m.

The three moorings host a diverse array of instruments that include a zooplankton sonar, 4K cameras, pH, CO2, CTD-oxygen, and broadband hydrophone sensors (detecting signals up to ~ 100 kHz) that “listen” to mammal vocalizations. The science pods make 9 trips up down through the water column a day, stopping at specific depths on the down cycle to measure environmental parameters that include pH and CO2. In concert, these instruments are providing unprecedented insights into processes operating in the coastal to blue water environments: real-time observations of thin layers, strong currents along the Cascadia Margin that in 2019 blew the Slope Base Shallow Profiler 200 m platform (12 ft across, 7,000 lbs) down 50 m below its normal depth and 150 meters to the west, and fine scale vertical advection of temperature by passing of wind driven inertial waves. Data are available through the OOINET and through the interactiveoceans data portal that provides numerous interactive visualization functionalities to explore the data, as well as download capabilities.