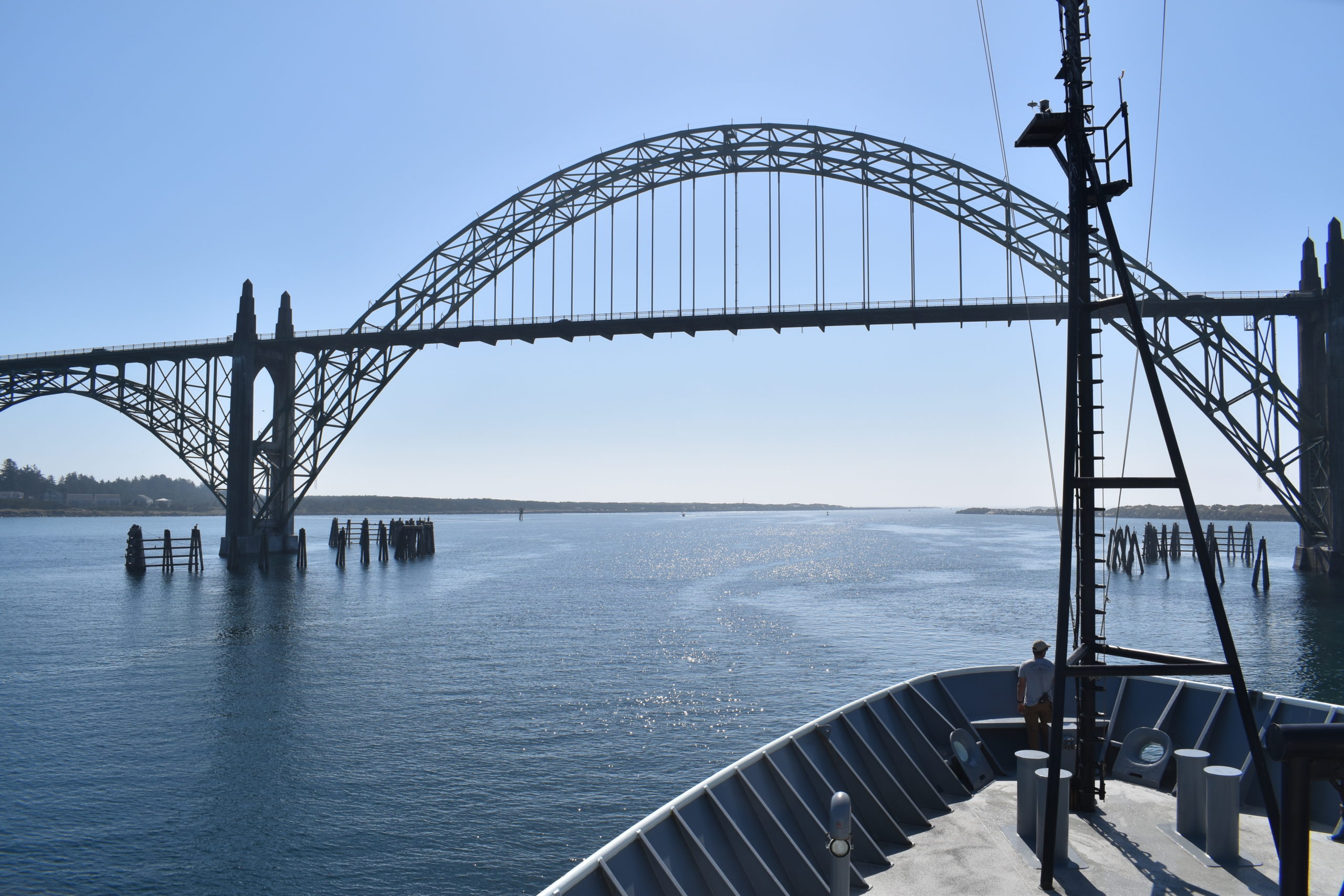 Legs 4 and 5 saw the successful recovery and reinstallation of the Shallow Profiler Mooring at Slope Base, but it was not without a huge team effort by the RCA and ROPOS teams, and R/V Thompson crew!

The reinstallation operations for Leg 5 began on September 10th with mobilization of replacement mooring gear loaded onto the R/V Thompson. This included the refurbished Shallow Profiler 12-ft across, 5,600 lb platform that will soon rest 200 m below the oceans’ surface,  a series of three, 4,000 lb anchor plates to be built up into what would be a 10,000 lb stack for securing the >2900 m-long electo-optical cable leg of the mooring to the seafloor, >3,000 m of cable electro-optical cable (EOM), over 90 floats to be attached onto the leg of the EOM cable, and the instrumented Platform Interface and instrumented winched science pod Assemblies to be installed once the mooring platform deployed. In addition, there were numerous large metal baskets of rigging gear, line, acoustic releases and other floats loaded, as well as the secondary junction box MJ01A. The mobilization was especially intense due to the need to spool the >3000 m of EOM cable onto the drum of the medium-lift winch – an operation that required an intricate layout of spooling gear on the fantail of the Thompson and the hands and eyes of lots of RCA engineers. With all loading, checking and securing of gear complete, the R/V Thompson left port at 1445 on September 12th for the ~5-hour transit to Slope Base.

The Thompson arrived on site at 1953 and ROPOS was off deck at 2000 to swap out the medium power junction box MJ01A at 2907 m. This dive gave some of the engineering team time for some much-needed rest for the long days of intense deck work ahead to install the Shallow Profiler Mooring – operations completed during daylight hours for safety.  The dive went very well and ROPOS was back on deck by 0239 on the 13th. All folks kept a sharp eye on the weather as the installation would require calm seas!

Using the floats at the surface, the mechanical leg was brought onboard and attached to the 12 ft-across platform on deck as was the second leg composed of the EOM cable. This leg serves two critical purposes – 1) once installed and connected to an extension cable on the seafloor, the EOM cable provides real-time power and communication to the engineering and science instruments on the mooring; and 2) its placement with the anchor at the bottom of the cable determines the deployment “height” of the mooring 200 m-deep platform. The father away the EOM anchor is from the deployed mooring platform, the deeper the platform will be beneath the surface as it pulls down on the platform.

With both legs connected to the underbelly of the platform, it was lowered into the water at 1136 – a very friendly cormorant named “Cleo” supervised operations. The R/V Thompson began slowly moving towards the position where the EOM anchor would eventually be lowered onto the seafloor: the EOM cable was slowly being spooled out during this operation.

This phase of the deployment is very work intensive as it requires the attachment of 94 syntactic floats onto the cable, which help hold the EOM leg cable taught once in position. This operation took several hours.  At 2015, with the ship in position, the 10,000 lb. EOM anchor entered the water using the trawl wire of the ship. The trawl wire was attached to the EOM anchor via an acoustic release for subsequent recovery of the trawl wire. A beacon attached to the trawl wire, which sent acoustic signals to the ship, provided the latitude-longitude location of the anchor as it neared the seafloor. The anchor landed on the seafloor at 2333 local time within a few meters of where the original EOM anchor had been deployed in 2014 in 2900 m of water (9500 ft)!

Never give up: What should have been a relatively simple operation of recovering the trawl wire, was not to be and required the “never give up” – “can do” attitude of true seagoing professionals.  The ship sent an acoustical signal to the beacon on the end of the trawl wire to open up a latch on the acoustic release that would release it from the anchor and allow for the recovery of the wire onto the ship. However, try as they might, even after over two hours of attempting to get the latch to open, the effort was unsuccessful. Operations were suspended for the night – the crew had been hard at it since before 0800 that prior morning!

Renewed with some sleep, the ship, RCA, and ROPOS personnel met at 0800 to review the situation and discuss how do “we” get the cable back onto the ship (which was effectively anchoring the ship also in place). It was decided that a specialized hydrostatic cable cutter that the Thompson had would be lowered down the trawl wire and cut the cable nearer to the seafloor, however, this operation was also unsuccessful. Finally, with no other options remaining, the trawl wire cable was secured onto the fantail of the Thompson in two places, which allowed the cable to be cut safely on deck and one end released from the ship.

But much remained yet to be done. The next team discussion included 1) "what is the status of the trawl wire, acoustic release, and anchor on the seafloor; and 2) "Can we successfully complete plugging in of the Shallow Profiler Mooring to the RCA cabled infrastructure so that it can send its valuable oceanographic information in real-time back to shore over this next year".

The ROPOS expedition lead, Keith Tamburri, after much thought and discussion said that they would dive on the site (two cables were now in the water), determine the status of the infrastructure and see if the mooring could be plugged in. This was met with significant gratitude by the RCA team as diving with another wire and one on the seafloor can be a challenging operation.

On September 14th at 1337, ROPOS went into the water to begin its nearly two-hour journey to the seafloor. Once there, the ROV carefully and cautiously followed RCA extension cables with known locations to approach the anchor, the EOM leg of the mooring, and the trawl wire.

After surveying the status of the gear, using their manipulators, with much skill, the pilots were able to open the acoustic release, freeing it from the trawl wire and recover this expensive equipment. They also recovered the beacon, released some floats that had been attached to the trawl wire, and with a huge sigh of relief by all and much joy! ROPOS successfully connected the EOM cable to the seafloor infrastructure! Over this next year, the RCA team will develop a plan on how to recover the trawl wire from the seafloor.

It is difficult to convey the patience, incredible hard work, and strategic-thinking that this effort took by the team. But, this is what we do at sea – problems arise and all work together to solve them. The RCA team very much thanks ROPOS and the Thompson for making this a success.

A bunch of very tired folks (some had been out for more than 40 days on this expedition), were very happy to return to Newport on September 16, knowing that we had completed all operations (and more) set out for the NSF-funded, OOI-RCA VISIONS’22 expedition.