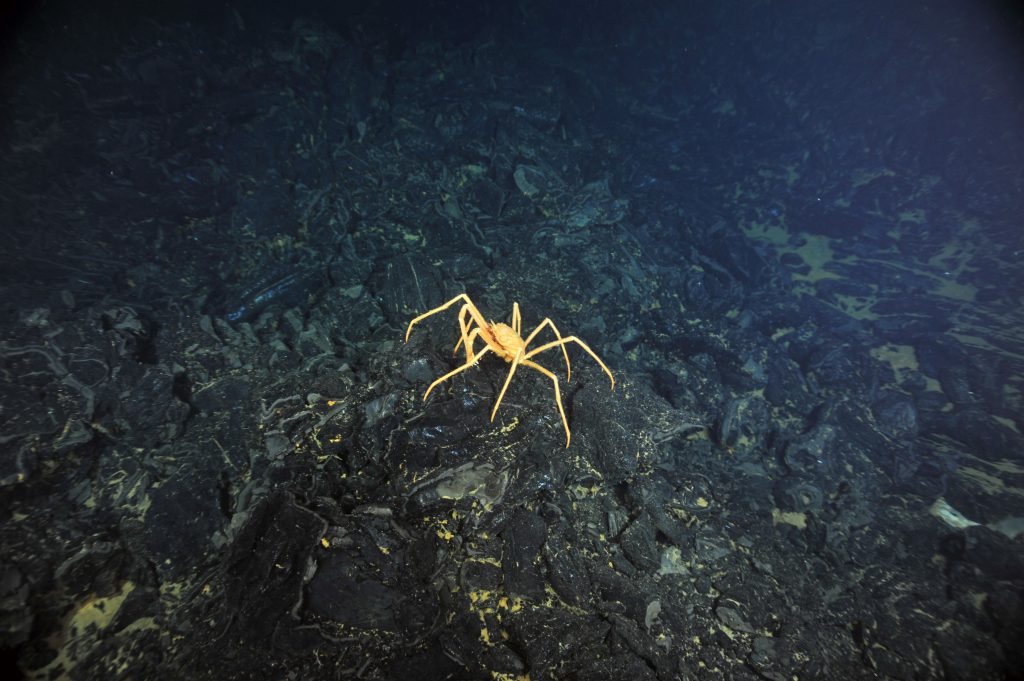 Spider Crabs are major predators and scavenger at Axial Seamount. They belong to Order Decapoda, and therefore have four pairs of walking legs, and a set of large claws. Spider Crabs use these claws to move food found on the seafloor to their mouths. They are slow moving, but migrate over the lava flow seafloor with ease, being attracted to any unusual disturbances, such as the construction of a deep sea observatory! These large

arthropods are noted for their affinity for and curiosity of instruments being placed on the seafloor. They have been known to act aggressively to submersibles and robotic vehicles.  Spider Crabs are very common on Axial Seamount. Females and juveniles are found closer to the vent fields, while the males range further afield. Adults can have a leg span of up to 80 cm (31.5 in).
References:
http://www.nrcresearchpress.com/doi/abs/10.1139/z87-369#.U9Q519hOX3g http://www.pmel.noaa.gov/eoi/nemo/explorer/bio_gallery/biogallery-Info.00016.html http://www.pmel.noaa.gov/eoi/nemo/explorer/bio_gallery/biogallery-Info.00017.html

This Crustacean is light tan in color and has six walking legs, and two significantly

larger claws. A tail can be found curled underneath the thorax, along with another pair of smaller appendages that are believed to be used for cleaning. There are two pairs of antennae protruding from the front of the carapace. Squat Lobsters are found primarily on and near hydrothermal vents, and eat both sulfur oxidizing bacteria and organic vent debris.  They range in length from 20 to 30 mm from eye socket to rear edge, and the width of their carapace ranges 10 to 15 mm.
References:
Austin, Williams. "New Marine Decapod Crustaceans From Waters Influenced by Hydrothermal Discharge, Brine, and Hydrocarbon Seepage." Fishery Bulletin 86: 263-287. Web. 27 July 2014.
Keiji Baba, Shane T. Ahyong & Enrique Macpherson (2011). "Morphology of marine squat lobsters". In Gary Poore, Shane Ahyong & Joanne Taylor, The Biology of Squat Lobsters.

A deep-sea crab from the family Lithodidae was seen crawling around the equipment and on the pillow basalts down at the International District vent site at Axial Seamount.