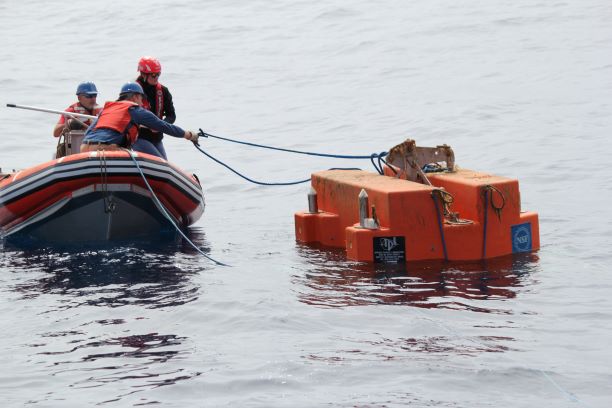 The Regional Cabled Array Expedition (VISIONS’19) is now underway. Funded by the National Science Foundation, as part of the Ocean Observatories Initiative, this cruise will see more than 100 instruments brought up from the seafloor and a companion set taken back down using the remotely operated vehicle.

The R/V Atlantis set sail from Newport, Oregon at 0800 June 2 for the start of this 44-day expedition, with the first worksite >300 miles offshore at the base of the largest and most active underwater volcano off our coast – Axial Seamount.

This highly complex cruise includes months of planning, logistics of trucking >80,000 lbs of equipment down to the ship and loaded, and over the four legs, staffing of nearly 50 scientists, engineers, and students.

It was with great excitement that the team sat sail to the volcano, a trip that lasted about 22 hrs. During the transit, final preparations were made for the partial recovery of a state-of-the-art shallow profiler mooring that includes a 12 ft-across, 7,000 lb platform, anchored to the seafloor by two legs reaching a depth of 8500 ft beneath the oceans surface. The ship arrived on station early morning of June 3, and work began by 0815.

This is an intense operation that includes the release of the mechanical leg of the mooring, and recovery of the platform on deck.

Following this operation the second mooring leg (electro-optical-mechanical), which hosts the submarine fiber optic cable that provides connection to the Internet through >500 km of seafloor cable extending to the Shore Station in Pacific City, Oregon is disconnected from the mooring platform and the entire 8500 ft of cable is brought onboard the ship using a 18,700 lb winch secured on the deck of the ship. This was a long, but successful operation.

Today the weather gods are telling us they are still in charge and so operations are halted until the seas are once again calm enough to conduct operations. During this time, the UW team is working on documentation and conducting final preparations for reinstallation of the shallow profiler mooring. Final connection of the mooring and installation of instrumented science pods onto the platform will occur on Leg 2.