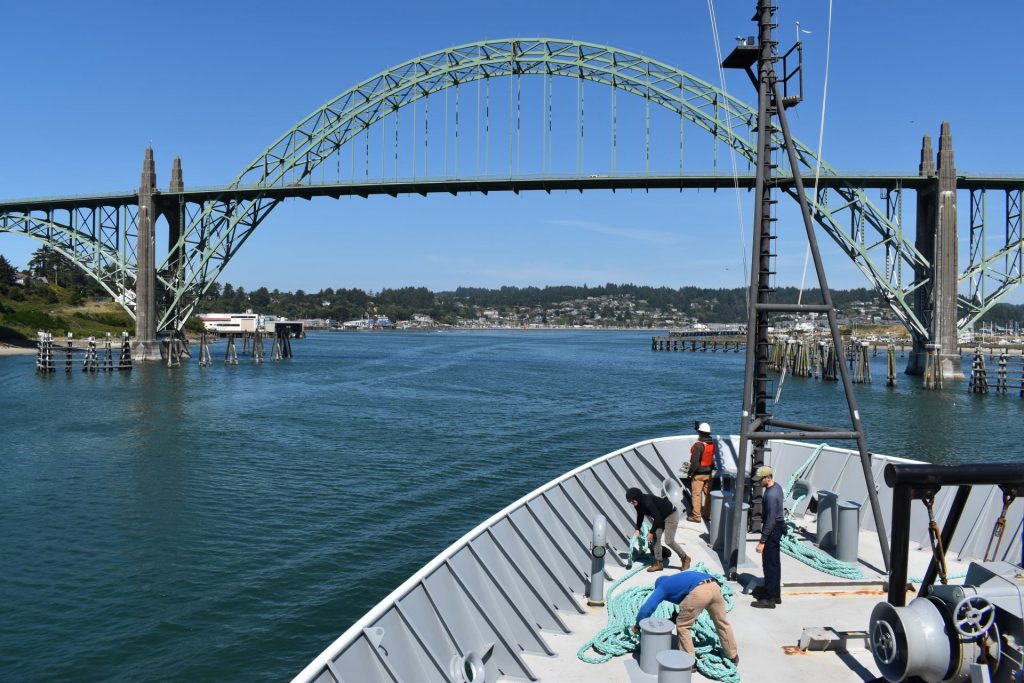 Yesterday, the RCA team saw shore again for the first time after nearly two weeks at sea. The R/V Thompson sailed into port under blue skies and calm seas: several tons of equipment awaited them at the dock to be mobilized onto the ship once the Leg 1 instruments and platforms are offloaded.

Brendan Philip, a masters student from George Town University (Science, Technology and Policy) and undergraduate (BSc. Oceanography) and masters student (Oceanography) recipient from the UW School of Oceanography, experienced his first time sailing as a Chief Scientist. It’s hard to convey all the tasks and responsibilities of an RCA Chief Scientist helping to direct work on a global class research ship, but Brendan did a phenomenal job – well done! Working with James Tilley (lead engineer from the UW Applied Physics Laboratory), the RCA engineering and science team, and the ship and ROV teams, he oversaw 24 Jason dives and the recovery and reinstallation of > 170 instruments, and numerous mooring platforms, vehicles, and junction boxes.

Thousands and thousands of images were taken and hours of 4k and HD video to document all shipboard and underwater efforts. Round the clock operations were done with a nearly continuous eye on the weather as the NE Pacific weather gods chose to tease the team with large swells that put operations on hold for short periods of time.

Some of the highlights for Leg 1 include the reinstallation of the high definition camera at the summit of Axial Seamount, which is once again streaming video back to shore at the speed of light at 1.5Gb second from 300 miles offshore and nearly a mile beneath the oceans’ surface. All Shallow Profiler science pods and all Deep Profiler vehicles are profiling – the only place in the worlds ocean where continuous measurements are made of ocean properties from depths as great as 9500 ft water depth to just below the surface. Two novel instruments were re-emplaced in the hot springs Diva and Escargot in the International District hydrothermal field -one of the most extreme environments on Earth – measuring temperature, pH, hydrogen sulfide, and the saltiness of the fluids jetting out of the metal sulfide vents. Once again, Jason provided spectacular views of life that thrives beneath the waves in total darkness and nearly freezing conditions.

Leg 2, will be visiting all of the RCA sites, including Southern Hydrate Ridge where explosions of methane bubbles rise from the seafloor, and the underwater hot springs again at the summit of Axial Seamount. Because of COVID, only 1 new RCA team member will join the ship – Dr. Orest Kawka who will sail as Chief Scientist: Brendan will sail as Co-Chief. Plans are underway to conduct some live broadcasts from the ship through the NSF-funded STEMSEAS program at Lamont-Doherty Earth Observatory. Although weather looks a bit “bumpy” near shore ~ August 15, conditions look promising after that for calm seas and good diving conditions. From shore, we send the TN382 team best much thanks for all their hard work during Leg 1, and best wishes for Leg 2.