The End of Leg 1 in Sight 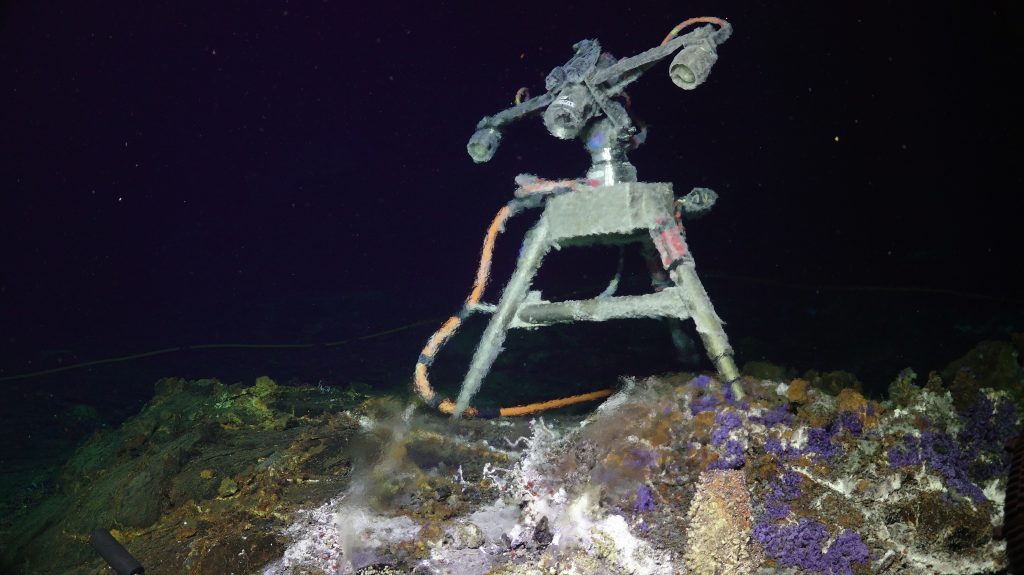 The weather gods have been a bit finicky this year, and showing their power this past week by creating large swells that resulted in a few delays in dives.  However, all planned work was completed at Axial Seamount. Within the vent fields, which are some of the most extreme environments on Earth, chimneys reach nearly 60 feet tall and vent fluids at 349°C (660°) at the sulfide monolith called El Guapo. A novel instrument that measures temperature, pH and hydrogen sulfide was turned at the Diva chimney (J2-1267) venting some of the highest CO2 (this gas issues from the magma chamber a few kilometers beneath the seafloor) -bearing fluids at Axial. Real-time chemical-temperature data from this instrument, developed by Dr. William Seyfried and Kang Ding at the University of Minnesota, provides important information about high-temperature, fluid-mineral reactions operating beneath the seafloor. This white-grey chimney is composed of fine-grained anhydrate (CaSO4) and sulfide minerals that make the young growth highly friable.

Another novel instrument, developed by Dr. Marv Lilley and E. Olson at the University of Washington, was installed in the chimney called Escargot, which measures temperature and resistivity as an analogue for chlorinity. These parameters provide information on conditions of fluid-vapor phase separation at depth and are highly sensitive to cracking/fracturing in the subsurface. There is also a significant lunar tidal signature imposed on the vent fluid temperatures, resulting from changes in pore fluid pressure in the subsurface that are impacted by the pull of the moon at 5000 ft beneath the oceans surface!

Upon completion of the work at Axial Summit, the R/V Thompson transited to Axial Base (depth ~ 2600 m) to swap out the instrumented Deep Profiler vehicle. Deep Profilers at this site, have been operational for >17 months completing two profiles a day from ~ 2650 m to 127 m, which translates into over 8 million ft of ocean water that the profiler has transited through making measurements in real-time. One key operational consideration in designing all of the equipment on the Regional Cabled Array (RCA) was efficiency in at-sea operations and turning of instrumentation. With this in mind, the RCA engineers, working with the Canadian remotely operated vehicle team for ROPOS, operated out of the Canadian Scientific Submersible Facility, designed and built a special holder (sometimes called the ‘clamshell’) that secures a Deep Profiler vehicle onto the front of the ROV for deployment and recovery. The clamshell was subsequently modified somewhat to fit onto the ROV Jason. Special locking-unlocking mechanisms allow the ROV team to attach the new Deep Profiler vehicle to the mooring cable, and latch it in place. The ROV then retrieves the vehicle that had been previously installed in a similar fashion. This innovative technology allows the Deep Profiler vehicles to be turned each year without having to recover and reinstall the moorings, saving significant time and costs.

The R/V Thompson is now working at the Oregon Offshore site to turn the Deep Profiler vehicle, followed by conducting a CTD cast to sample nearby ocean water to collect verification samples for instruments on the profiler vehicle. Once the RCA team completes sampling, work will commence at the Slope Base site to also turn the Deep Profiler vehicle there and conduct CTD casts. Hopefully the large swells that were at this site on the way to Oregon Offshore will have settled down. In a couple days, land will once again be in view after two weeks at sea, and the cycle will repeat itself in preparation for Leg 2.