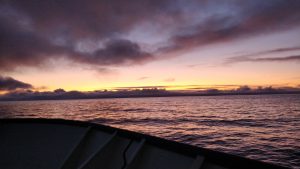 When I first got on the boat, I felt like a kid. I was overcome with a sense of awe and curiosity. I kept thinking,

The Regional Cabled Array cruise AT42-12 (May 30-July 12, 2019) was highly successful with the completion of all tasks scheduled for the annual maintenance and operations expedition. The cruise was extremely complex and required highly detailed logistics and personnel planning. Over 53 days, sixteen 48-ft trailers, and six 16-ft flatbed trucks moved 166 tons of RCA equipment to and from the Seattle, WA and Newport, OR. Onboard staffing during the four legs included 52 personnel with 13 students, six non-OOI PI’s-technicians from four institutions and one member from industry. In addition, Susan Casey, a New York Times bestselling author (i.e. The WAVE, the Devils Teeth, and Voices of the Ocean) participated on Leg 4.

As part of the NSF Oceans Month, a 1-hour Facebook live interactive broadcast was conducted, including live streaming of imagery from Jason working at Southern Hydrate Ridge and a period for questions and answers.

There were 58 Jason Dives ( J2-1144 – J2-1201); only three were aborted. The vehicle worked extremely well with very short turn-arounds and the team was highly efficient in installation and recovery of instruments/infrastructure. The Atlantis crew also provided exceptional support. The RCA team gives a big shout out to both Jason and the Atlantis for jobs well done and to contributing to this highly successful cruise. Other highlights from the cruise include:

The cruise included nine days for the installation and recovery of PI instruments: